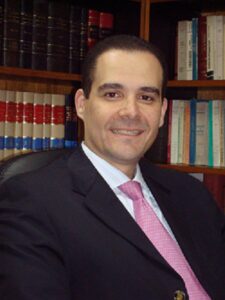 Gustavo A. Serrano Bauza was born in Caracas, Venezuela. Serrano has an extraordinary professional profile and has dedicated his entire life to teaching and advising in various fields of administration, finance, taxation, accounting, and international law.

Serrano has vast experience in the accounting, tax, and audit areas. He worked at the Escritorio Jurídico Torres Plaz & Araujo as a partner of the Tax Advisory Department in the period 2001-2003. Currently, works as a Managing Partner at Serrano, Cid Asesores, Accounting and Taxes, Venezuela, a company he has directed since 2003. Also serves as Managing Partner at SC Global Advice LLC, USA, from 2014 to date.

He stood out as a Speaker in Tax Updates and Accounting Seminars in Venezuela. At the same time, he was dedicated to tutoring Bachelor’s Thesis in tax matters for obtaining Undergraduate and Postgraduate Degrees in different Venezuelan universities.

Serrano wrote about Adjustments for Inflation in the Income Tax Law, “Proposals for a Tax Reform in Venezuela” (X Venezuelan Conference on Tax Law 2011). Was the author of several opinion articles in the Torres Plaz Araujo Tax Bulletin, in the CPC Magazine of the Colleges of Public Accountants of Miranda State and the Capital District.

The administration sciences professional is a member of the College of Public Accountants of Miranda State, Venezuela, and the Colombian Institute of Tax Law (ICDT), Colombia, of the National Tax Association, USA. His extensive career has led him to be honored with important distinctions.

Are you looking for professional for your business or industry?

Get a free quote

Sign up for our newsletter and be the first to know about the latest tax news.

Our firm offers a wide range of services to our individual and corporate clients. We are pleased to offer personalized, quality service with professionals with long experience in businesses of various kinds.